Did pension freedoms burden or liberate?

Pension freedoms: a new beginning, not the beginning of the end

This blog is normally an opportunity to muse on other aspects of life away from pensions, but this one sits squarely in the middle of all things actuarial.

No-one foresaw then-chancellor George Osborne tearing up the tax stranglehold on Budget day four years ago, unclenching a grip which effectively forced most people to swap their pension for an annuity, which wasn’t always great value.

The changing way we work - and live - was credited as the inspiration behind this policy. Cynics painted it as another opportunity to collect yet more tax from money people had saved from income which had already been taxed.

A pension is not your sole source of funds

And while about five million individual payments totalling £23bn have been made from opened pension pots since then, it’s not been as uncontrolled as some had feared.

Nightmare visions (unless you’re a car dealer) of cash-happy pensioners splashing out on a Lamborghini while neglecting to check if they had enough money to live on for the rest of their lives, were among the first stories to set a predictably negative context.

Notwithstanding the doom-mongers, it appears people have actually been rather sensible.

And that may be because most of us recognise we will keep working in some way, shape or form. If it gives you an income, offers stimulation, the benefit of your experience and helps others, most would find it hard to argue against. It also means a pension is not your sole source of funds.

While many have taken advantage to get their money when they need it, they are also conscious of the need to keep something back.

So was it enlightened policy-making, reflecting the changing world of work or a disguised tax grab with unforeseen consequences?

Clearly, if something works for the government and HMRC, it is judged a political success so I can’t imagine there were too many grumbles in Whitehall.

This chart from a recent FT piece does tend to support the positive case, showing how people long thought of as at retirement age are engaged in anything but. 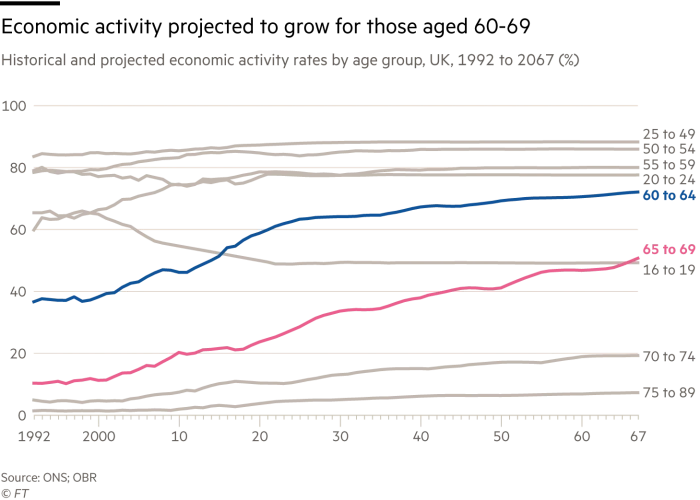 The only upward curve over-60s were traditionally associated with in my era was time spent in the garden or at the bowls club. Now that I am one of them (only just), nothing could be further from the truth. I know my wisteria from a wall-flower but don’t belong to a bowls league. It looks like I belong on this chart.

There are still traps for the unwary when it comes to the amount you can save into your pension tax-free which is highlighted in this FT story.

And worries persist that there will be a generation of pensioners who have run out of money, who will not only turn to the state for help but sue government for leaving them penniless.

That’s for the future. Every change carries risk but this is one that freed people to have more say over what is arguably one of their biggest investments, in an era when the nature of work and retiring is being re-defined as a new beginning, not the beginning of the end.

While noting the downside - especially the ongoing effort to warn against scams and making sure people know what they’re getting into - I’d say this was a good thing.

"While many have taken advantage to get their money when they need it, they are also conscious of the need to keep something back."

Our range of companies and services has developed alongside the needs of our clients, the changing regulatory landscape and also the wider trends we see across society.